Our team at Eisenberg Cutt Kendell & Olson has been investigating Polaris injury claims since 2015. These popular off-road vehicles are unnecessarily dangerous, and their manufacturer has continually put profit and sales over that of consumer safety, leaving countless injured and several dead. In a recent article in The New York Times, writer David Jeans exposes the Polaris RZR scandal for the dangerous liability it is.

The article profiles several of our clients, as they tell their harrowing stories of catastrophic and sometimes fatal injuries. If you own a RZR product, make sure you’re aware of the dangers associated with Polaris RZRs and to find out what’s happening with current legal cases.

As The New York Times article points out, Polaris fire hazards are nothing new—the company has been dealing with reported fires over the last decade. However, as other competitors begin to offer similar vehicles, Polaris has beefed up their latest models, compromising safety in order to make their newest RZRs faster than ever. As a result, their newest models continually skimp on fire safety.

Polaris Industries has issued 10 separate recalls for fire hazards since 2013, and they have received complaints of more than 180 associated RZR fires during that time. Additionally, 4 people have lost their lives, and at least 30 have suffered major burn injuries. 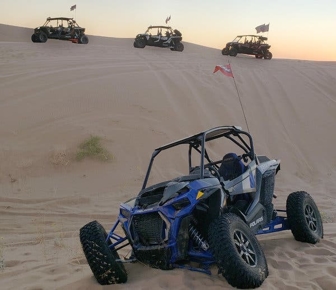 To make matters worse, Polaris has, on multiple occasions, reported conflicting data about fire reports and other similar complaints. For example, in 2011, the Polaris head of product safety reviewed between 8 and 15 reports of heat damage in their vehicles, which led him to encourage a recall. However, Polaris refused. Just a short two years later, when Polaris had to issue a recall, they told the safety agency that they only knew of one incident of heat damage—although they’d reviewed at least 8 a full two years prior.

Our injury attorneys at Eisenberg Cutt Kendell & Olson have been at the forefront of Polaris RZR cases for several years and we’ve handled several cases on behalf of injured victims and the families of those who’ve lost their lives in RZR fires. In The New York Times article, they used many of our resources to reference some of the victims, the damaging vehicle fires, and the ongoing litigation.

We are proud to serve as authorities on this atrocious issue, and we hope our knowledge continues to serve those affected by Polaris’ irresponsible actions. Since we opened our doors, we’ve obtained more than $400 million in compensation for our clients and we have received national recognition for the legal work we’ve done on behalf of injury victims. If you were injured in a RZR fire, or if someone you love lost their life in a Polaris vehicle accident, our firm wants to help you fight for the justice you deserve.